Welcome to the 17th edition of Berry Go Round!  Before you get started here, you may want to check out the 16th edition hosted at Quiche Moraine.  It’s full of exciting posts on mutualism.

GrannyJ’s A garland of leaves at Walking Prescott, is a beautifully illustrated post comparing the shapes and colors of a variety of leaves.  As she says, leaves are “quite as interesting as flowers, though not nearly as gaudy.”  My personal favorite of her many examples is a leaf that looks like it’s been knitted!

In addition to some garden plants, she posted quite a few shots of natives.  One of the features many of them have in common are tough, evergreen leaves.  If you want to have leaves that stick around in the desert, they should be tough, filled with some nasty chemicals, and good at conserving water.

I find ant-plant mutalisms fascinating.  If you liked Jeremy’s post as much as I did, you may also be interested in this Science article about ants, Acacia, and large mammal herbivores.  Ants protect Acacia from large mammal herbivores and are rewarded with nectar. When the mammals were kept away from the plants for a number of years, the Acacia stopped providing so much nectar for the ants.  This seems like a good thing to do – why waste resources feeding the ants if you don’t need them to project you anymore?  However, the lack of nectar caused the ants to lose their competitive edge against stem boring beetles which did all kinds of damage to the trees and even caused many of them to die. 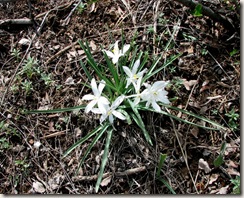 Sally at Foothills Fancies writes about a trip to Lair o’ the Bear and despite the rather scary title – Live at the Bear’s Lair – the post is full of flowers, not carnivores.  This Sand Lily is just one of the lovely wildflowers she highlights, sharing this interesting little tidbit:

In these spring plants, the ovary is below ground level, so the pollen tube has a long way to go to reach it. The seeds mature underground and later get pushed out onto the surface where they can germinate.

While it sounds like Sally had a great trip, she was disappointed at not getting any good pictures of Pasqueflowers (Pulsatilla patens). Lucky for us, Priscilla Stuckey of this lively earth presents us with both lovely photos of Pasqueflowers and their strategy for fending off snow and ice along the Front Range of Colorado in Pasqueflower’s risky business.

Janet Creamer from Midwest Native Plants, Gardens, and Wildlife has another wildflower-filled post for us – Flowers and such from Boch Hollow.  When I saw her photo of Running Buffalo Clover and learned it was endangered, I got a little nervous – wasn’t that the plant I spent half my childhood pulling out of our flower gardens? I was relieved to find out that it was not!  The weed I remembered is White Clover, which is in no way endangered.

Emily at No seeds, no fruits, no flowers: no problem shares her first field trip of the season in First ferns.

She has several stunning fern photos featured, including these Dryopteris goldiana fiddleheads.  They’re ENORMOUS and kind of look like some sort of larvae to me. Luckily, they don’t squirm and have such nice colors, so I’m not disgusted.  When I went to Lotusland last year, I was impressed with the fiddleheads on one of the ferns I saw there.  They were as large as my fist!

Martin Nuñez at The EEB and flow blogs a recent paper that shows that Artemisia tridentata recognizes itself.  How cool is that?

Last but not least, I’ve got some ID puzzles for you all!  I met David while I was teaching English in China.  He’s currently teaching in Suzhou, which is famous for its gardens.  The following photos were taken in The Lingering Garden and he wants to know what these plants are.  He didn’t get shots of the leaves or growth habit, which makes this a bit more of a challenge.

Click on any of the photos for a larger image.  Also, I highly recommend browsing the rest of David’s flickr photos – they’re wonderful!

If you’d like to stick around for a bit, you might be interested in my series on extinct plants or the trip I took with my university’s botany club last spring.

That’s the end of Berry Go Round #17! Use the carnival submission form to send in posts for the next Berry Go Round. I’m not sure who’s hosting the June edition, but you can always check the blog carnival index page. which will be held at Foothills Fancies.